HOST, INVITE, JOIN, PLAY, PARTY Hosts can organise Tambola party games. Friends, kitty party groups can join directly via multiplayer game invite link or with easy to read invite codes. There is no limit on the number of players who can join or the number of games that one can host. Games can also be scheduled in advance for eg. Sunday or evening. TICKETS, REQUEST, APPROVE, STRIKE Friends can send requests for any number of tickets. Host can approve(or reject) the tickets. E-Tickets are generated instantaneously, free, to every online player on the app. Hosts can also see how many tickets each player is playing with. Players can keep track of the matched numbers by striking them directly on their ticket on the app. Ticket generator is based on a random system logic and cannot be manipulated. Host is also allowed to buy ticket(s) for himself. REAL TIME, AUTOMATIC NUMBER CALLER When all players are ready, the host can start the game by drawing the first number. Every number drawn by the host is automatically called on every players' screen. Host has complete control on the pace of calling the numbers. He can pause, go fast or slow the number calling depending on the online group. Even when the numbers are called by the host, he has no control on what number will actually be called. NUMBERS BOARD At any time, players can pull the board from the left side drawer to check all the numbers which have been called till then. This is useful if some numbers on the ticket was not/incorrectly cut or strike. DIVIDENDS, PRIZES Housie has multiple combinations or dividends on which prizes can be claimed. Most popular ones being Jaldi 5, Corners, Rows or Lines, Full House. Multiple claims on a dividend like 2 Full Houses are also possible. The app supports 80+ housie variations including Breakfast, Temperature, Lockdown, 143, CID, Star, Odd/Even. AUTOMATIC CLAIMS, BOGEYE, RESTORE BOGEY Online players tap on an available dividend to claim prize. Prize claims are automatically verified. App automatically checks the ticket's number against the called numbers. Player wins the prize if the claim is valid. In case of an incorrect claim the ticket will be Bogey. Host has an option to restore a bogey ticket. I-CHAT, AUTO RESPONDERS, INSIGHTS The app features a smart chat option. Friends can post messages to each other including the host. Message options are powered by our intel system which automatically gives recommendations depending on the game play. Insights from the game such as 'Player waiting for Full House', 'Player(s) strike at number' are automatically sent to the group to simulate offline game experience. NO CASH PRIZE, REAL MONEY, COINS App doesn't reward its users with any cash prizes, earn real money or win tambola coins to play the game. It's a free simulation of the real tambola game and is intended for entertainment purposes only. IT'S ALL THE SAME Tambola is also popularly known as Indian Bingo, Housie, Bingo 90 Ball game. OPEN FOR ALL PUBLIC TABLES Looking for someone to play with you? Join the public tournament, a new one happening every 10 minutes with players from all across the country. FACEBOOK OR GUEST LOGIN UNLIMITED, PAPERLESS, 100% FREE DOWNLOAD NOW MADE IN INDIA With loads of Love 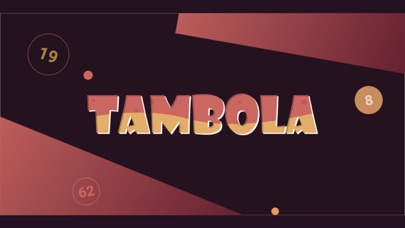 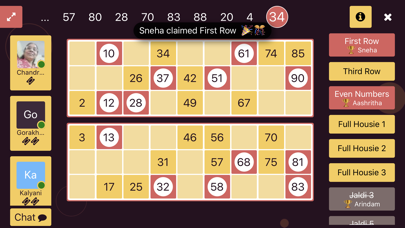 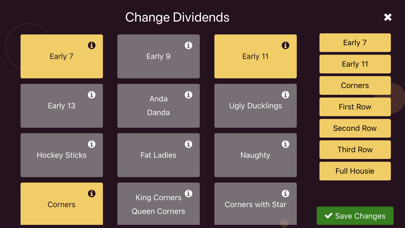 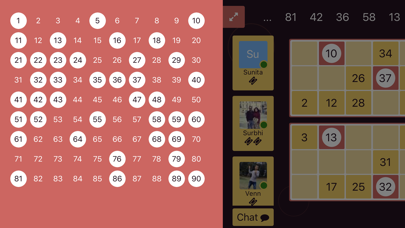 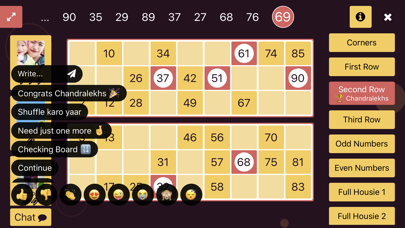 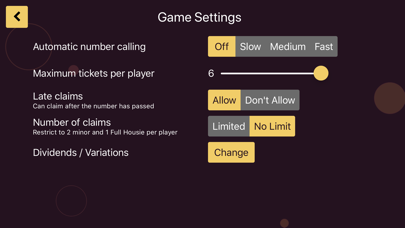 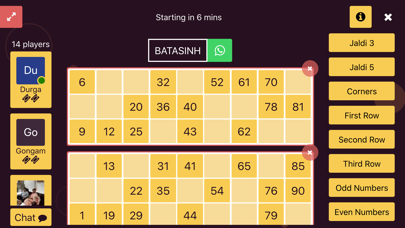